Free delivery on orders over R 400.00, after discount. Note: Discount calculated at checkout. 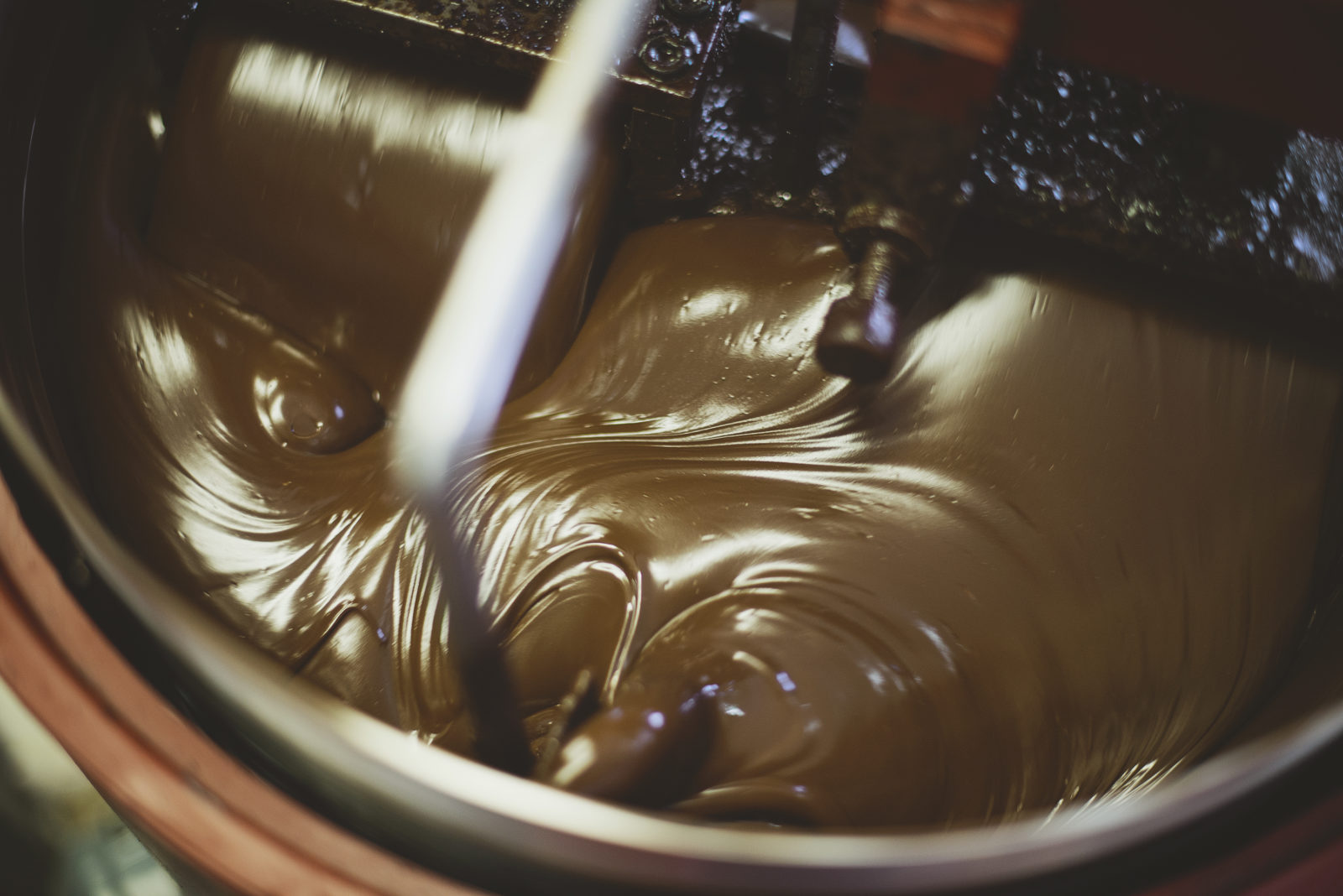 Everything from the roasting of the cocoa beans and nuts, to making the caramel and chocolate cookies, takes place at the factory in Paarl.

South African company, De Villiers Chocolate, has released a range of no-added sugar bars made with nut butter, something its owner and his customers are smiling about.

It all began in a Hermanus garage in 2010 with machinery Frankensteined together from ordinary household appliances and gadgets. A decade later, the story has come so far as to produce a new type of chocolate – still using custom-built machines – that is vegan, Keto-certified, gluten-free, and rain forest-friendly. With no added sugar either, but still utterly delicious, it’s like a modern miracle.

The discussion about chocolate has been going on forever, as scientists study MRI brain scans in an attempt to truly understand why we – for the most part – love it so. There is consensus that chocolate triggers the release of endorphins and serotonin, which make us feel good.

So far, so good. Giving chocolate as a gift to someone special in the hope it will lead to some rumpy pumpy could work psychologically, especially if it’s a lavish and expensive gesture, but physiologically, there’s no proof it’s an aphrodisiac. It does, however, contain the chemical phenylethylamine, a mild mood elevator our brain produces when we feel happy or in love, and can be taken to relieve depression. So yes, chocolate makes us happy – win.

“Chocolate has a special place in most people’s lives,” he said. “I see it on their faces as soon as they walk into our tasting room and catch a whiff of that chocolate aroma in the air. Even people who are initially disinterested grow a smile after tasting their first piece of De Villiers Chocolate.

“What ultimately gets me up in the morning is the knowledge that we will be creating bars of happiness to be enjoyed as a treat or as a gift for someone special.”

That seems to me a rather good purpose in life. I bet De Villiers loves dogs too, like some kind of saint.

De Villiers Chocolate came to life in a garage in Hermanus in 2010, when De Villiers cobbled together repurposed washing machines, ovens, fridges, hairdryers and vacuum cleaners – and a spice grinder – to begin making chocolate, which was sold at a local market. There’s more about the history on the website, so we’re going to fast forward to the new addition to the DV range: nut butter bars, and nut butter no added sugar bars.

They have a host of benefits attached; they are vegan for a start, so no dairy. They contain no gluten, no trans fats, no palm oil or GMOs, and the Ugandan beans are Rainforest Alliance certified. The No Added Sugar range is sweetened with monk fruit extract which makes it suitable for diabetics and ideal for Keto/low carb followers, with as little as 5.9g of glycaemic carbohydrates in an entire bar (coconut). That’s only 1.8g per 30g serving but honestly, who’s going to stop there when you can have so much more, without the guilt – or the negative effect on the jean pant?

There are eight bars in the two ranges. “We experimented with several flavours. Our in-house team, along with friends, went through several tasting sessions to whittle the range down to eight bars – two dark chocolate and six nut butter bars,” said De Villiers.

The darks are 70% cocoa and Salt and Seed. The nut butter ones – which, by the way, are incredibly smooth and creamy – are 33% cocoa, flavoured with chocolate cookies, sea salt and caramel, coconut, and various nuts: almond, cashew and hazelnut. I’m not well known for my patience so I had to ask if De Villiers anticipates additional flavours in the future.

“Yes, we do,” he said, leaving it at that. The man could be a poker player too.

The research and development of these bars has been a long time in the making – five years on and off – since De Villiers visited Turin, Italy, the home of the original gianduja paste, in 2015. “I have been working on perfecting a uniquely African version of Italy’s famous nutty chocolate butter. The Italians managed to achieve this with a set of ingredients consisting of locally sourced hazelnut cocoa from selected origins and recipes developed over time.

“With our range, we used the same concept of combining tree nuts with cocoa beans, but we went further than just using hazelnut. We only use African cocoa beans sourced from Western Uganda. In the end, I wanted to produce the same silky texture and expand on the idea of gianduja,” explained De Villiers.

“One of the most frequent requests we’ve received from customers has been for no-added-sugar chocolate,” said De Villiers. “This resulted in us trying different combinations of sugar replacements but we found that most of the available options were not nearly as palatable, still caused blood sugar and insulin levels to spike or caused unwanted gastrointestinal side effects.

“In line with our belief that first, chocolate needs to taste good, and second, do no harm, we decided against further research and development at that stage. What changed this was the recent availability of monk fruit extract and non-GMO soluble corn fibre which overcomes the limitations of earlier development attempts.

“We decided on a carefully curated combination of erythritol, monk fruit and non-GMO soluble corn fibre – ingredients that have been carefully selected for their unique ability to mimic the sensory profile of sugar without causing any of the unwanted blood sugar and insulin spikes or unwanted gastrointestinal side effects.”

By incorporating nut butter, more ingredients are being added to the chocolate-making process (it always amazes me how humans began with that big ol’ bean and ended up with what we eat now). This is done from its raw format and what is especially challenging is the marriage of nut and cocoa butter, said De Villiers.

“When I started making chocolate 10 years ago, I did it with repurposed and recycled home appliances. With one of these machines, we incorporated granite stone as a medium to grind the cocoa beans down to a silky-smooth texture. In making our nut butter chocolate, we again used these old granite stone machines to grind and integrate the nuts with roasted cocoa beans, resulting in a similar velvety mixture.”

The new chocolates are a testament to not everything about the pandemic being bad: “We spent a bit of time on it whenever time allowed. With Covid-19 we found ourselves in lockdown and dedicated our time to focus on the completion of these products. We started at the end of April and the product was launched in mid-September,” said De Villiers.

He added that he does not know of any local or international producers that use this combination of ingredients to create a product similar to theirs, so it’s rather special. We’ll take that as a win for the Western Cape too; the factory is in Paarl.

Right in the beginning, De Villiers Chocolate was staunchly African, from the source of the beans to the labels and design. Things have a tendency to evolve over time though. “All our cocoa beans are still sourced from Africa and specifically Western Uganda. Although some of the ingredients, like the monk fruit in the no-added-sugar range, do not grow in Africa, we do however make everything ourselves locally from the roasting of the cocoa beans and nuts to making the caramel and chocolate cookies in our kitchen,” said De Villiers.

Yes, that’s all gluten-free, which is flipping marvellous.

Since inception, De Villiers – as a company – has been mindful of doing no harm to people or the planet and selects its cocoa beans with this in mind. “We were the first African chocolate brand to receive the UTZ certification. UTZ recently merged with the Rainforest Alliance for which we were certified,” said De Villiers. “Both certifications stand for ensuring no harm to people or the planet. With so much misinformation around, we believe it is crucial to get certified by an external, independent credible organisation. Saying so is no longer good enough.”

De Villiers is justifiably proud of the accomplishments and what has been achieved in the manufacturing of the chocolates, in particular the nut butter/no added sugar bars, which can be enjoyed by just about every human no matter how fussy they are about what they eat. He enjoys creating, taking an idea and turning it into something tangible – or edible in this case. “We want as many people as possible to enjoy our products without doing any harm,” he said.

General feedback from the people who have had the opportunity to try the products has been overwhelmingly positive. “The response to date has been awesome!” confirmed De Villiers. “I never expected this as it is our first attempt at no-added-sugar. The conventional nut butter chocolate is getting just as much positive feedback.”

The new ranges are available exclusively through the online store and at the tasting venue at Spice Route in Paarl. DM/TGIFood

Sign up to be informed of special offers, news and new product launches

By clicking enter you are verifying that you are old enough to consume alcohol.

Your cart is currently empty.